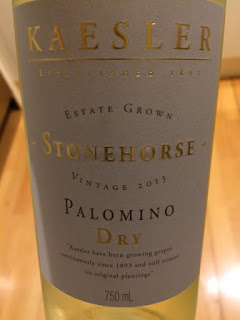 From Barossa Valley Palomino vines planted in 1961, this wine has been made into a dry table style rather than into its usual fortified apera style wine. Unusual and not without interest.
Pale gold colours with a light greenish tinge.Smells grassy and floral with some petroleum and slatey mineral action occurring in the background. It has a Riesling-esque feel about the perfume and indeed the taste.Zesty lime and citrus flavours over nectarine and talc fill the light to medium weight palate. Fresh and clean.
The mouthfeel is quite fat and as the wine progresses through the mouth it peaks mid-palate before dropping off towards the finish.

Dry and fresh in its overall feel. Not a complex wine but it is easy to enjoy. Serve well chilled. 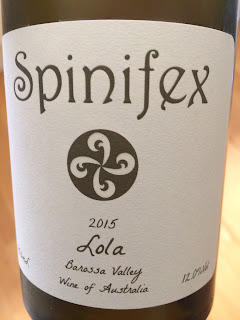 %, Ugni Blanc 23%, Viognier 12%, Clairette 3% and 2% Muscat Blanc a Petit Grains from Barossa Valley fruit. Some of the Semillon and Ugni Blanc vines have been around since the 1850's !

Pale golden straw coloured wine in the glass.
There is a fragrant bouquet of nectarines, lemon blossom, florals and herbs that is also so fresh you just want to dive in and experience.

Pithy texturally with honey, citrus, pear and green apple flavours complemented by sweet garrigue spices and dusty tannins. Pleasingly balanced, juicy with an impressive savoury length.
This is a subtle and delicately flavoured dry wine, a testament to the exceptional winemaking skills of Peter Schell and Magali Gely. 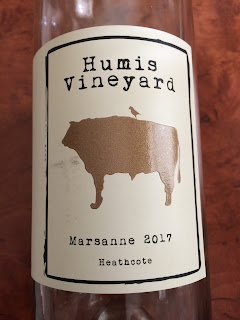 The wine exhibits a medium straw colour.
Heady aromas of lemon/lime, marzipan, green peas and hints of grass. Very fragrant and lively.
It tastes of green capsicum and honeysuckle showing alongside some peach and citrus nuances.

There is an initial spritz interestingly but it's dry overall with tart acid, some mineral charm and soft chalky tannins.
The balance is just right and the texture and juicy flavours are persistent throughout.

Although taut now, drinking appeal is not an issue. Will improve in complexity with up to ten years cellaring. Much to like here. 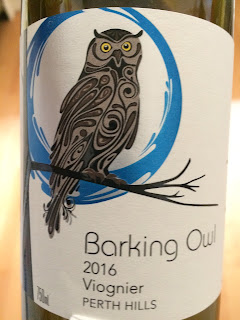 Yes, these feathered creatures do exist but their call is more of a yowing noise as opposed to a bark. Much like the wine. More bark than bite if you get the drift.

Established in 1996, the Millbrook Winery is situated at Jarrahdale, south-east of Perth. It is one of four wineries owned at present by the Fogarty Wine Group. Its Barking Owl wine range is designed for short-to-medium term drinking.

This wine is straw yellow colour with a green tint.
Moderate aromas of apricot, ginger and cinnamon spice coming through on the nose.
The lean palate shows tropical fruit and fresh citrus flavours, soft acidity with the finish dry and crisp.
It felt mono-dimensional and a little underwhelming to me and not the most convincing example of Viognier tasted.

Nonetheless, there is a strangely crowd-pleasing appeal to this well made
quaffer. Complementing for example a range of gastro pub fare would be a good fit. 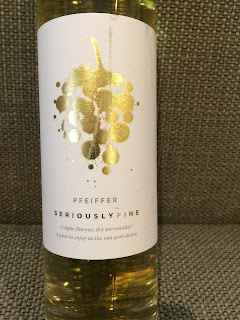 Childhood memories can have lasting impressions. Taking a quick, surreptitious swig of Grandma's port or sherry as a youngster was not the ideal way to introduce yourself to the world of wine. All you could feel from the experience was your very insides wanting to depart your mortal coil ! Thankfully, over time things and tastes do change and one's stomach evolves to cope with fortified wines such as sherry.

To avoid a modern-day Spanish Inquisition of sorts, Australian regulations now prohibit the use of 'sherry' as a descriptor with 'apera' nominated the official go-to word. Cool term this, a play on the word 'aperitif', which at the same time keeps the Iberians reassured !

The grape varieties used in the Pfeiffer Seriously Fine Apera NV are Palomino or Palomino Fino to be exact, and the rare French variety Monbadon. The winery claims to have the only known plantings of Monbadon in Australia and use it for its similarities to Palomino.
.
Palomino is a white grape variety from Spain's Andalucia region used primarily in the production of sherry. The white variety Monbadon known as Berger in the United States, is the offspring of the Cognac grapes Ugni Blanc and Folle Blanc and from accounts is now virtually extinct in Southern France.

The Apera is pale straw in colour with fresh aromas of almond, vanilla, apple and citrus on the nose. A dry palate displays roasted almond, some bitter herbal notes and citrus flavours that are refreshingly intense. It has a body the lighter side of medium. There's a freshness also that reminds of sea spray/sea shells, underpinned by appealing minerality and a tangy bitterness to both mouthfeel and finish. Serve chilled.

This wine has won accolades and awards as long as your arm over the years, the latest a trophy from the 2016 AAVWS for the Best Fortified Wine. So why turn to the Spanish stuff when Jen Pfeiffer along with other dedicated winemakers are producing such seriously good apera, helping to create a new wave of appreciation for the great Australian fortified wines of yesteryear. Now, Grandma would be pleased. 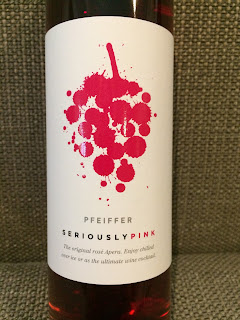 Seriously Pink could be described generally as an aperitif style fortified rosé. In specific terms however it is an apera, the name previously given to sherry-inspired wines. Since September 2011, Australian producers have been prohibited from using the term sherry due to European Commission and Australian regulations.

This apera is a blend of Touriga, Tinta Rotiz (aka Tempranillo), Shiraz and Gewürztraminer (!) with a dose of brandy spirit added to oomph things up during fermentation. Despite the heat, it's well balanced.

No prizes in guessing that the colour is somewhat on the electric pink side. Lifted fragrant aromas of fresh strawberries, roses and spices that invite you in. The palate is clean and refreshing with flavours of glacée cherries, florals, musk sticks and confectionery. Finish and aftertaste are refreshing and more-ish. Enjoy over ice as an aperitif.

Lots of charisma and interest. Recommended. 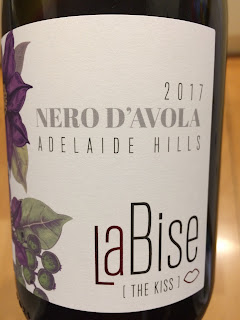 The inaugural release of Nero d'Avola from talented winemaker Natasha Mooney who has nailed this Sicilian variety on its head with fruit from the Adelaide Hills.

Lots going on in the aroma stakes with smells of earth-dusted red fruits, chocolate, cherry cola and white pepper.
Black jelly beans, dried herbs and spice savouriness with the fruit ripe and flavoursome with raspberry, cranberry, pomegranate and sour cherry doing their best to entice and seduce.
Light- to medium-weight, excellent structure and the crisp cranberry acidity adds freshness and vibrancy.

Chalky tannins and light spices on the back palate add to the long savoury finish. Stylish release from La Bise that is good to drink from start to finish. Big tick here. 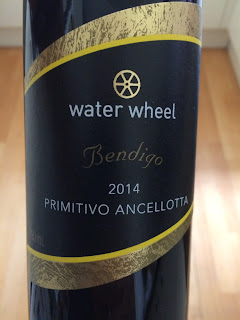 This is the first vintage of a unique blend in Australia from the Water Wheel winery at Bendigo with the Ancellotta component coming from the only plantings of the variety to date in the country.

Ancellotta Is a dark-skinned grape whose homeland is the Italian province of Emilia-Romagna, in particular the Po Valley where it is used to bolster the colour and character in lightly-hued wines such as Lambrusco.

Primitivo is itself a dark-coloured Italian variety and adding 20% of the dark-skinned Ancellotta into the mix and you get some seriously glass-staining, teeth-tarnishing deep purple/black colours.

The 2014 vintage opens with lifted aromas of violets, ripe blackberries and black pepper.
From the off the palate is medium-bodied and rich but not too dense or concentrated with
soft, sweet berry fruits, plum, dried leaves and sweet spice.
The fruit-driven palate is balanced by dark chocolate, sweet spices and.rustic fruit tannins.
There is a flavoursome, warm and juicy mouthfeel that culminates in a succulent aftertaste.

What is an alternative varietal